I was six years old when my father painted my body yellow with a huge biohazard sign across my little chest, dragged me to an anti-Nuclear-facility demonstration in Switzerland, protesting the construction of the second AW (Atom Werk) in progress and the high risk associated with it.

When in late April of 1986, the accident of Chernobyl scarred half of Europe into the reality of the risks of using the “power of the sun” as my father expressed; I was well educated in his views on my Plutonium Power Generation; He, as a professor for mathematics, physics, and chemistry on the ETH (Swiss University for Science and Technology) had instilled a robust perception on the ignorance of indeterminacy risk by generating energy through BWR (boiling water reactors).

I admit being a geek with too much knowledge about Nuclear risk, indoctrinated from early childhood on. With the catastrophic development in Fukushima, Japan, I compassionately realize a need to educate a very “blind” generation with a few simple facts: Everyone should be vigilant about the reality of the Fukushima Nuclear power plant catastrophe. Sorry, this is scary!

In 1967 the plans to build six Nuclear reactors in the Futaba District about 140 miles SE from Tokyo on an earthquake fault caused engineers to quit their respected jobs, frustrated that the Tokyo Electric Company and the conservative Government would not regard their warnings… The construction, however, started in 1971. Yes, the plans are old, the security was already outdated, and the population has since expanded 240% in the surrounding area. Partially, because there had not been an accident and foremost, the real estate boomed in the late ’80s, and compliance is a human trait.

All the signs were there: Chernobyl, as an example, killed over 1 million people today.  They died painfully of cancer. We still have over 20’000 people in a 300-mile radius from ground zero living with Thyroid cancer. The nearby farmland cannot produce vegetables beyond or above grounds for living consumption, not for humans or animals. Wildlife that feeds on these grounds are sickly or born with deformities; even the bio life in the immediate soil is unhealthy.

Although people who live in that area, growing their own food and herd livestock, are often medically diagnosed with distorted immune response and infertile. Today, 40% of Northern Europe, Scandinavia, Sweden, and Norway produced crops containing radioactive isotopes, sometimes 500 above levels of what humans can safely consume (60 times above some dubious guidelines set by some Government agencies). To humans with a compromised immune system, these products are deadly.  Hazelnuts imported from Turkey, sold worldwide, are unsafe food sources for people before/during cancer treatment… I have been eating them by the handful for 35 years: I know, weed doesn’t die!

Prolonged exposure to low radiation levels has been linked with increased levels of thyroid cancer, leukemia, cardiovascular diseases, respiratory illnesses, auto-immune disorders, reproductive dangers, and psychological effects. The half-life of nuclear waste is 30 years… it is assumed that until 2065 human beings should void eating produce, meat and fish in extremely high quantities from directly contaminated soil and water. Spikes occur every couple of years. These are generally associated with booms in the wild mushroom, another plant good at taking up radioactive nutrients, population. In 2014, during one mushroom boom, radiation levels reached 8,200 becquerels/kg, nearly four times higher than the year prior.

Back to Japan. We still have three Nuclear Power (NP) reactors damaged after the Tōhoku earthquake in 2011. Three of them without shielding cover. Two of the cooling towers were blown out by a hydrogen explosion, and with it, about 250 pieces of highly radioactive spent fuel rods scattered all over the place. Also, they are “old” rods. They still need to be cooled for about sixty years (we don’t really know because we have no reference…). If you held one of these cladded twenty-inch long and ½ inch wide rods next to your face, you would die within minutes of radiation burns. Your skin would boil and fall off your face. Standing ten feet away, you would die within days of inner organ burns, your eyes would dry out, and your brain shrinks. These old rods radiate dangerous high amounts of strontium even 1 mile away. To such an extreme, they can cause anyone to experience skin eruptions in months and years to come: internal damage equal to an AIDS patient dying of a whipped out immune system… if you’re right there, within the first few months!

I’m not trying to scare you. We have done extensive research around Chernobyl in nearly forty years. Google some pictures… And whilst you are at it, learn that Thyroid problems and cancer are most likely caused by poor lifestyle choices way before Chernobyl or Fukushima…

After the earthquake in Fukushima, the electricity went out. Within hours a Tsunami took out four diesel generators the size of a Midwest farm barn, responsible in an emergency to generate the energy needed for the 3M L H2O pM (one million gallons of water per minute!) to keep the facilities running safely. Gone. To date, about 30 tons of Nuclear waste needs to be cooled every year… It takes lot’s of water to cool the 500 lbs of active purified Uranium – in the core of each of the three facilities (Reactor 1, 2 & 3) in production – to keep it from melting: A term used when a critical stage of heat is overstepped (we are not sure about this precise measurement either). When that happens, the rods burn, glow, or melt uncontrollably through the 18 feet thick cement foundation, and there is no human way to stop it… Not even saltwater was pumped directly from the ocean for weeks after the disaster and washed back radioactive into the ocean…

In February 2017, TEPCO (Japanese Electric Utility Holding Company) released images taken inside Reactor 2 by a remote-controlled camera that show a 2 m (6.5 ft) wide hole in the metal grating under the pressure vessel in the reactor’s primary containment vessel, which could have been caused by fuel escaping the pressure vessel, indicating a meltdown/melt-through had occurred, through this layer of containment. Ionizing radiation levels of about 210 sieverts (Sv) per hour were subsequently detected inside the Unit 2 containment vessel that still leaks into the ground…

To date, 500 lbs in each of the three dysfunctional buildings have been safely removed… they could not cool them sufficiently for years. Two of the cooling pools stayed exposed or empty, and the Zirconium-covered rods evaporated, overheating, releasing radioactive steam that -in high amounts – might cause bone cancer, typhoid cancer, and all sorts of allergies for the next 600 years on earth. Okay, it eventually dilutes in the atmospheric region. Still, some will rain down on fields and become absorbed in oceans where it will be consumed by plankton feeding crustaceans, feeding little fish, feeding big fish, and is surely absorbed by us with no escape. It only takes 1/M of a gram to cause cancer in a human being. However, you would have to eat 100lb of fish every week.

Although 5 lbs of this yellow cake, Plutonium is enough to cause cancer in all living species on earth. (That includes us…) – that is a hyped-up hypothesis used by health gurus: I don’t recommend you eat the aforementioned nucleoid fungi that love absorbing radioactive substances, such as cesium-137, but here too, even when loaded with 10’000 becquerels/kg (5 times the recommended amount), I have to date never managed to eat a kilo (2lbs) of mushroom in one seating… certainly not for a week! 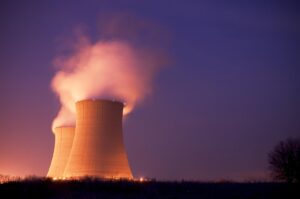 Right now, we have an estimated 1000 lbs of activated Uranium leaking radioactive energy worldwide. Each NP core weighs about 5lbs. Yes, it only took 5lbs to make the Hiroshima or Nagasaki bomb. From Japan to Chernobyl and from nuclear waste-filled barrels dumped during the ’50s/’60s to the bottom of the ocean, we have a serious problem on hand. Besides Global warming, we contribute to deep water creatures burping up – killed by radiation exposure. Toxic gas burping up into the winds and cruising onwards to North America and “falling out” (rain) onto our freshly sprouted farmlands. Yet, it’s very, very little harm to us.

For six weeks, Iodine 129 traveled freely into our atmosphere, causing Thyroid cancer in kids that lived in close vicinity but not much-affecting anyone over 40. The EPA claimed in 2012 that danger “has past…” because the half-life of iodine 131 is about 8 days. However, Cesium -137 (137Cs) has a half-life of 30 years and is still measured in the Bering Sea. Historically, cesium-137 levels in the Pacific Ocean were below 2.0 Bq/m3. The EPA (Environment Protection Agency) considers drinking water containing levels of cesium-137 up to 7,400 Bq/m3 to be safe for human consumption.

In October 2019, the Fukushima Prefectural Federation of Fisheries Cooperative Associations also voluntarily suspended seafood shipments after white perch contained 53 Bq of radioactive cesium per kilogram. The permitted level is only 50 Bq of radioactive cesium per kilogram of white perch. With global warming, the marine fungi absorb waste, and equal to the Chernobyl spike in radioactive measurements in foods, we estimate that certain fish might be unhealthy to consume when living with a compromised immune system. Yet again, who eats a kilo of white fish for dinner?

I was furious about the oil spill in the Gulf of Mexico, but the catastrophic aftermath of Nuclear Power disasters is a concern. Still, it rarely has anything to do with “radioactive foods when learning about unexpected health issues.” The human notion we could play with the sun’s energies has gone terribly wrong, yet – our toxicity from manipulating foods or pre-processed junk and sugar far outweigh any cesium levels measured in foods. If you fly in an airplane, by the time you’re “checked and landed,” the exposure to radioactive particles is larger than the next 100lbs of fish you eat from Japan!

When I consult with my clients to adjust food and lifestyle choices, knowing where and when produce and foods are grown or harvested, these findings become important to share when making an informed suggestion while guiding others through health issues! And this is where I have to explain to you that eating fish from most places is healthy; we are much “sturdier” than most assume.

We don’t know the answer to consuming cesium-137 long-term effect. Aside from Government agencies’ lax attitude, private-funded research concludes similarly that the high amount of waste has not diminished. Well, let’s look at it this way: A. Einstein estimated it would linger 600 years in groundwater supplies and possibly harm any living organ in this time frame – who cares –  That is a freaking long time and nobody really knows, right? (yes, I intended to poke fun…)

As a Buddhist, I have to end this “outburst” with a kind and encouraging note: Don’t get spooked by nutritionists claiming to be informed when frightening you about mercury and radio-active seafood – and then recommend shrimp grown in ponds – always next to a pig farm – from Asia to be healthier… Yes, fish waste feeds pig, and pig waste feeds shrimp… (order the green curry with chicken next time). I’ve heard it all! Indeed, there are many solutions that mother nature offers us to cope with. Pollution is everywhere, put into your body through the eyes and ears in greater amounts than through your mouth. We can adjust our intake, be it physically and mentally. It requires that we become informed and don’t turn numb to the facts available.

Self-promoting as it seems, I teach an awesome course in cooking with TCM and consuming healthy food that can balance our immune response, which will aid our abilities to cope in this short cycle of wondrous living.