An old opinion is still accurate. Remember, I wrote about “privacy violation” in 2010; We have since evolved, AND not for the better…

I know this is going to be most provocative, but the deeper message intended is serious.

TSA has now implemented thousands (as of 03.2019) of their newest x-ray machines, and before the year’s end, we will have 20’000+ of these radiation boxes in airports, schools, Gov building, and hospitals all over the United States. Growing up as a child, the doctors would lay a heavy lead-belt on your groin to prevent the radiation from damaging your testicles; even now, radiologists, as do current TSA employers, “hide” behind protective barriers to prevent radiation damage to their bodies while claiming that the low rate of these rays is of no harm. Really? 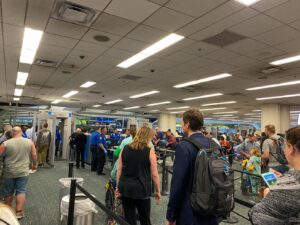 This is especially comical to me when jet-setter clients explain to me in their kitchen that radio-active fish from Japan is dangerous to their health. Well, you would have to consume 200lbs of such “Fukushima fish” before it “levels up” to one passage through these electronic doors…

Although the satirical notion that child molesters have a perfect opportunity to work for TSA, anyone into groping women or men should be ecstatic about the newest level of results the past Bush administration has implemented through fear-tactical politics. I recognize that a father must feel awkward and a mother irritated when their daughters and sons are “padded” following TSA regulation, …at the end of their torso…. Clarity: We happen to have a penis, testis, or a vagina on that “end.” I care less that this touch is done with rubber gloves or the back of the hand: It is of no soothing comfort when having a stranger uninvited reaching between my legs. I’m not allowed to deny this abuse; unless I risk not boarding or ending up on a no-fly list!

“You have a choice to travel without flying….” Homeland Security Secretary Janet Napolitano expressed. We all should take her up on this offer! That was a stupid and diminishing remark to enforce a piece of security implementation that ensures little overall security nor prevents any modern terrorist from being effective.

Whilst the Senate can barely manage nuclear arms treaty and enabling perilous people to access neglected archaic weapons, our Homeland Security office aggressively campaigns on multiple media levels the need for security screening to prevent terrorist access to airports/aircraft… should they acquire black-market nukes. You can actually google “do it yourself” devices guides for explosives that go undetected by modern scanners… I know, crazy! 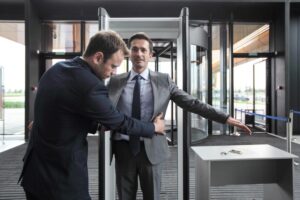 I doubt you would carry that next to your dick… Oh darn, yes – the Underwear Bomber. Why do we not strip naked now??

The propaganda to support the purchase of outdated screening machines worked well because the US ranks 19th on the intelligence level of people working in Government. Compared with Medi-Care reporting monthly 15’000 “accidental” death in US hospitals, the damage a terrorist could add to the preventable death rate seems insignificant.

I have nothing against gays in the military. Still, any dude touching my junk while I’m holding my hands “straight” out sideways in public (or traveling with my business partners) is uncomfortable, especially when I can smell your BO. What’s worth it is the idea my junk image could be enjoyed by an abusive employee and consequentially anyone on the internet after a TSA x-ray documented (accidentally) leaked my private parts, or a TSA employee thought it was okay to share it. Depending on your celebrity status (or size) – that image might become exploited on the web!

Let me “play” a little with this scenario in airports. Although the TSA claims that none of the clear naked images of scanned travelers will be stored or collected, we already have over 10’000 such images/video clips on the net proving their claim a lie. After that quick check, any TSA scanned image should have no secular purposes, yet the data is collected – i.e., people’s height, weight, and contour. What for, I find questionable. It does not surprise me that our Government would multi-task by implementing such x-ray computer results with other Homeland references, designed for security reasons… But the outdated excuse that this infringement of my privacy enhances my security – is going too far.

When I stand in line, in socks (there is always a barefoot dude around…) while witnessing the unhygienic undressing of other passengers (how does a woman walk barefoot through an airport?) – realizing the absurd lack of organization is not comforting. Any TSA employee with a lesser education and background check could instantly add me to a terrorist watch list – if I even look disgusted. The invitation to “place your private items in the plastic bin” grosses me out. That “anything in your pocket…?” patronizing question followed the unshowered dude too close in front of me, pulling a handful of wet tissues out of his pockets.

I assume he snickers with his colleagues after “padding” me down about what he “felt.” I ponder what levels of joy they experience when reaching beyond the “pockets” of obese passengers; could they store explosive devices in the fold of their stomach? A Buddhist monk calmly enduring the humiliating procedure while looking straight at a group of young travelers filming his strip-search on their i-phone; What was he thinking?

The bureaucrats in Washington responsible for these security implementations, mostly traveling via private jets, do not think about the psychological stress some parents endure when TSA employees fumble their off-springs. Today’s politicians are numb when embracing our concern while they cash in on their industrial endorsement… Terrorists have perfectly achieved what they intended; Americans now accept Government excused groping and the storing of triplex images of their citizens. The abuse of these images has just not escalated to a concern of importance: equal to the level of concern by  Julia Roberts nude pic on Twitter or the naked images of Brad Pitt’s kids on Facebook. Nobody has the finances to prevent the sexting of unimportant people’s images circulating: It’s sexual exploitation. The TSA comforts that they merely check the “end” of my torso. I would laugh, but this is sick. Have we really evolved to the level where parents now encourage their children: “…go ahead sweetie, let that man/woman touch you on your genitals, it’s for our security and quite alright…”

TSA had to adjust to several national scandals, continuously failing to properly background-check their employees. I’d like to know more about the people touching my sex! The government calculates that we would not share our disagreement once we are confronted with this security check halfway en route to our destination. We can’t get arrested and stamped “dangerous” for even rolling our eyes at them. If we boycotted flying to initiate change, it would happen in a day! Airlines could reject TSA from touching us if they would realize the serious loss of revenue. How come we still use electronics that require a human hand to do a “follow-up”?

Just record when approaching the TSA scanner and record TSA employees tapping (with the back of their hands…) children, nuns, politicians, celebs, and grandmothers on breasts, penises, and vaginas.

I curse all of them loud and vulgar in my little head whilst presenting a calming exterior smile. I have no crumble of compassion for any of these uniformed over-rated security peeps…